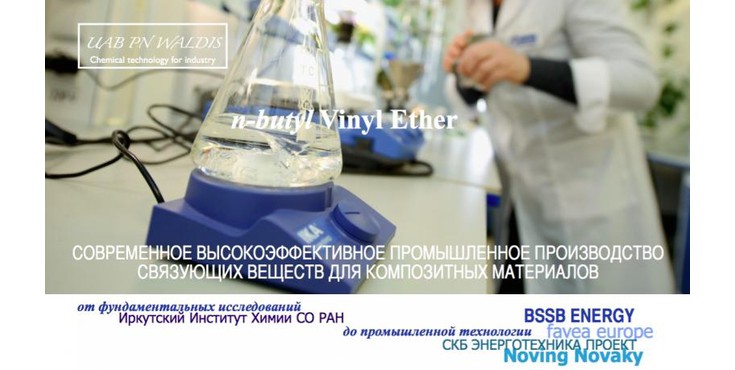 At this stage: the formation of the Founders of Etreat, production enterprises, specializing in the production of butyl-vinyl ethers, popular products from components of composite materials to noveishih plasticizers. In detail cost items and planned work in the first year of operation. The authorized capital of RUB 300 million, 3000 shares — 100%, one share of 100 thousand rubles. (See. Articles of incorporation)

An international team of scientists — minded, engineers, and technologists have developed an industrial technology for the production of butyl-vinyl ethers. Technology outperforms the existing technology in efficiency and safety.

The pressure in the reactor of synthesis

Yield in a single pass CONV.ed. to one of the main raw material.

The use of butyl-vinyl ethers:

The volume of Russian market of 116 million euros according to ITC (WTO 2014). The market is restricted by high import prices. Prospects for the use of butyl-vinyl ethers in the production of them in Russia is the implementation of 300 million euros.

Butyl vinyl ethers are not produced in Russia. Fully (100%) are imported — Europe, China. Based on them and produced the above products. At the same time raw materials for the production of butyl-vinyl ethers — butyl alcohol produced in Russia. Hence it is advantageous to locate production in Russia, which will not depend on fluctuations in exchange rates, and on cheap Russian raw materials will produce for the local market and for export, competitive products.

The implementation of — 39, 1 million euros

The project payback since the start of production for 3 years

Time of construction is 24 months

Allowed a pool of investors, and the use of Bank loans. Possible transfer of rights to the technology as an additional safeguard.

For interested investors to send the business plan and other information.

5.2. The founders have determined that at the time of establishment of the company, its authorized capital is 300 000 000 (three Hundred million) rubles. On the formation of the specified amount in the special account described in section 1.4. Agreement authorized by this founder is obliged to register the Society in the state registration of enterprises.

5.3. Authorized capital of the company expended for the following purposes:

5.3.1. — Purchase a license for the production technology of butyl vinyl ethers, tetrahydroindole and their derivatives — 104 000 000 (four Hundred million) rubles

— Room rental and technical services of the management company of the industrial zone "Alabuga" at the rate of 200 sq. meters — 2 400 000 (Two million four hundred thousand) rubles

— The Fund for the payment of bonus to employees — 336 000 (three Hundred thirty-six thousand) rubles.

Investor holding more than 10% of the shares receives the right to have a representative on the Board of Directors.To retrieve the subscription list, please contact the Deputy project Manager Oleg A. Ryapolova

Russia, The Republic Of Tatarstan, Alabuga