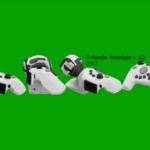 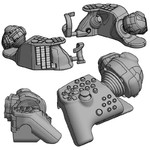 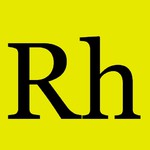 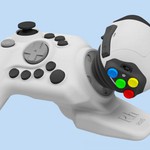 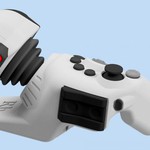 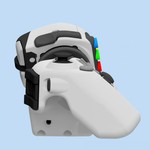 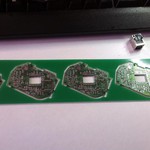 We invented, patented and developed a prototype device, which surpasses the best world prototypes that will revolutionize the market of computer games. With its study we want to get into a huge competitive gaming market, where we found the vulnerability and which they want to use.

R-Handle is a new type of gaming device that combines the properties of a computer mouse, keyboard and classic controller for game consoles and PCs.

Over the past 16 years, the world has sold more than 400 million game consoles of different types. Thus sold every year approx 13 million for various consoles. In addition, for example in the US the private property is located approximately 190 million personal computers (PCs) and laptops. Also in recent years actively developing virtual reality (VR) and unmanned equipment, including quadcopters. World market of computer games is about $ 100 billion. a year. This does not include the annual production of various equipment that may be ten times higher.

Among the major manufacturers of gaming consoles are the leaders of Sony (PS) and Microsoft (Xbox), which have one common disadvantage — their gaming controllers. The fact that their basic controls are analog sticks that are controlled with your thumbs, which does not achieve sufficient accuracy during gameplay. This fact forces game developers to simplify the gameplay, which in turn makes it less thrilling than the versions of the same games for PC. For this reason, the console games market is almost missing some game genres that reduces the number of console users PC, thus reducing total capitalization console market.

Currently there is a situation that the user in favor of comfort, have to put up with the inconvenience of control a gamepad, so either sit comfortably in a chair and play a controller awkward or uncomfortable sitting at the table and comfortably play with the mouse and keyboard.

We believe that the potential market for our devices are all PC, game console, mobile devices, a growing market of helmets of a virtual reality (VR) and market quadcopters, and other various unmanned vehicles. Our device can be made in various configurations, including as a standalone gaming gadget with built-in or removable screen.According to our rough estimates, based on data from the Internet in the U.S. alone, the market for our devices may be, at a retail price from 150 to 250 dollars. for a single product, from 1, 5 to 3 billion U.S. dollars (at 5% coverage of the market of consoles and PC). This figure does not take into account the amount already purchased consoles, tablet computers and smartphones.As for virtual reality (VR), we believe that their in-game application comes to a standstill due to the lack of suitable game controllers. At the moment the focus is on creating controllers, which involves the waving during the game. We believe that this is not a viable direction. Anyone can verify this claim, just waved 10-15 minutes. In addition, the device (VR) require the presence of specially equipped rooms for immersive virtual reality. Now the developers recommend VR to its users, while using their helmets is in the sitting position, to avoid accidents. It turns out that everything goes to the fact that the VR users are our potential clients. Moreover, the company, the helmets potential buyers of our company (e.g., Facebook, Sony, Microsoft, Samsung, HTC, etc.).

Competitive advantages of the R-Handle, can create the conditions for developing their own gaming console, which will allow us to capture significant market share of game consoles, and possibly displacement from it giants such as Microsoft and Sony.

Our confidence is reinforced by the many publications about our product around the world (Type in Google — r-nesmeev or handle r-handle nazmeev).

Our formulation extends the market of computer games, because the gameplay with the help of our device, very similar to the game mouse and a keyboard. The main element of our controller is controlled by the whole hand, not one finger, like all other gamepads. Due to this, the pointing accuracy of the cursor is much higher than analog sticks. Since the device does not need a table, this allows you to fully play and use any computer programs sitting on the couch.

Currently manufactured and tested the first prototype of our device. Testing of the prototype showed that already at this stage, it is superior to all the commercially available controllers, including manufacturers such as Microsoft, Sony, Nintendo and even the recently-released Steam Controller from Valve, which, as stated, was to solve the problem once and for all.Now we develop an improved prototype version 0.2. In addition, we have planned many improvements to be implemented in the next prototypes.

On the basis of this development may be the range of devices of a new type. To bring them to the stage of industrial design will need at least 5 — 7 million U.S. dollars (this amount should be specified). This figure is pretty approximate, but it should include the possible cost of moving to more comfortable to work with regions close to the markets, the lease of premises and accommodation the cost of accommodation, pay for flights, participation in exhibitions, advertising campaign, purchase of the necessary equipment and software, hiring of additional specialists in the field of programming, design, electronics (6-8 people), as well as to Finance the production stage of fine-tuning and perhaps other incidental expenses. In the calculations it is necessary to assume that the team will run for approximately 1 year.

At the moment the team consists of two people, the authors of the project.For additional fundraising, we can use one or more crowdfunding platforms (here much will depend on advertising campaign).

To participate in the fundraising on the crowdfunding site Indiegogo, we are certified company Arrow Electronics (https://www.arrow.com/en/indiegogo).

The range of devices may have several configurations: 1. A separate control node.2. The maximum configuration with a touch screen, a wired or wireless connection.3. Minimum configuration, without integral screen mount for mounting tablet or smartphone.4. The reduction in size of the children's option.5. All of these options for left-handers.

Today we have a paradoxical situation that for decades to improve various gamepads and joysticks for precise control of cursor they are still hopelessly lag behind even the cheapest mouse. The paradox is compounded by the fact that over the last 25 years the performance of the PC and consoles has increased thousands of times, and input devices (gamepads) remained at the same level.

But despite this, huge corporations continue to manufacture their gamepads tens of millions a year. However, they are almost the same. This strange situation can only be explained by the fact that they are unable to invent anything new. And all this despite the fact that they rigorously compete in the same market segment.

We have created a device that will allow people to comfortably play games on any modern gaming device. You will also be able to use any software, from operating systems to graphic programs.

Stage: Project is at development stage